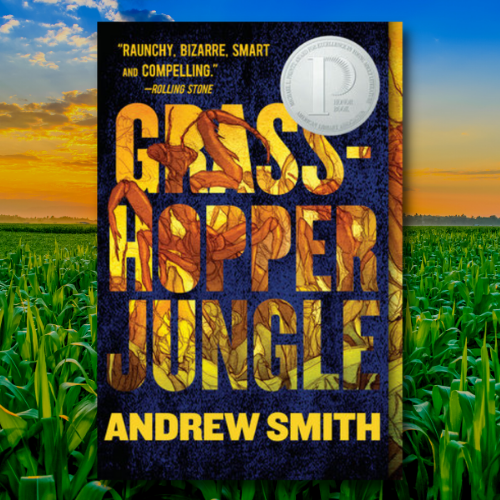 The Iowa Center for the Book has selected Grasshopper Jungle by Andrew Smith as the 2021 title for the Great Reads from Great Places program.

Great Reads from Great Places is a program from the Library of Congress Center for the Book to showcase the literary heritage of the nation's states and territories. Each book is selected annually by the Center for the Book affiliates and highlighted during the National Book Festival. The books may be written by authors from the state, take place in the state, or celebrate the state’s culture and heritage.

Austin and Robby didn't exactly mean to start the end of the world here in Ealing, Iowa but that's what happens when they unleash an army of six-foot-tall praying mantises and now this is the truth, this is history ... and nobody knows anything about it.

Funny, intense, complex, and brave, Grasshopper Jungle brilliantly weaves together everything from testicle-dissolving genetically modified corn to the struggles of recession-era, small-town America in this groundbreaking coming-of-age stunner.

Andrew Smith is the award-winning author of several Young Adult novels, including the critically acclaimed Grasshopper Jungle (2015 Michael L. Printz Honor, 2014 Boston Globe-Horn Book Award, Carnegie Medal Longlist) and Winger. He is a native-born Californian who spent most of his formative years traveling the world. His university studies focused on Political Science, Journalism, and Literature. He has published numerous short stories and articles. The Alex Crow, a starred novel by Kirkus, Publishers Weekly, and Booklist, is his ninth novel. He lives in Southern California. Find out more at www.authorandrewsmith.com.

Find out more about Great Reads from Great Places, get a link to a map of all states' titles, and see past Iowa selections at the link below: